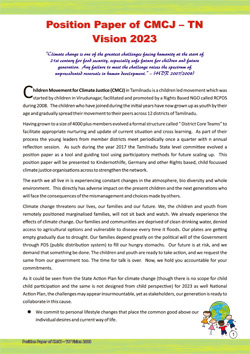 Children Movement for Climate Justice (CMCJ) IN Tamilnadu is a children led movement which was started by children in virudunagar, facilitated and promoted by Rights Based NGO called RCPDS during 2008. The children who have joined during the initial years have now grown up as youth by their age and gradually spread their movement to their peers across 12 districts of Tamilnadu.